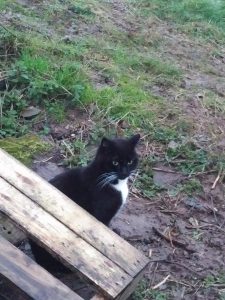 We got a cat, finally. I’ve been wanting a cat for ages. He is semi feral, but actually quite friendly if you can get close enough for a cuddle. We get all the purring and smooching that I love, even if he was a bit distant to start.*

The second day was a cold wet February evening and as I stood in the rain, trying to coax him back into the purpose built (quite cosy) shed with a sachet of cat food, I decided now might be a good time to think about life and the universe and all that and get a sense of how I was feeling. To try a bit of Mindfulness.

I instantly recognised a slight trepidation about the cat that had escaped on its first night and already had me worried whether he was a goner from a fox. This had definitely dulled the initial excitement of finally getting a cat. We have dogs, but I am definitely of the feline persuasion. This cat also has a job to do. We are inundated with rabbits and so as well as fencing, netting, raised beds and the occasional use of ferrets and a man with a gun, we are looking for a decent deterrent for the veg patch.

Anyway, back to Mindfulness. I had been advised by the GP (latest in a long line of recommendations) to try it as I am currently suffering with a stress related condition called Temporomandibular Joint Disorder. Basically I have started clenching my jaw so tightly it is causing pain and swelling in the joint. Mostly during my sleep, but also subconsciously when I’m awake too. I know, sexy right?

Now, I have a lot to be thankful for, and I’m not particularly stressed at the moment (the drugs help with that, see previous posts!). So what’s it all about? I will probably never get to the bottom of that one, and am not going to try. It’s probably more important just to deal with the impact its having on me, rather than the cause at this stage.

So I was stood in the dark, in a field, trying to be mindful and contemplative, and all that. As the rain hit the back of my legs, soaked through my jeans and ran down into my wellies, I decided that the cat was OK, he was close by mewing at me. He had had some food and knew where there was shelter (with carpet, cat bed and catnip claw scratch post).

I was happy he was around and decided any further soul searching for grounding and happiness could take place in front of the fire. Or better still, a hot bath.

* FYI He is now very much a cuddly cat. No longer distant and aloof, he even lets the kids pick him up, so can’t really call him feral, other than he sleeps outside! 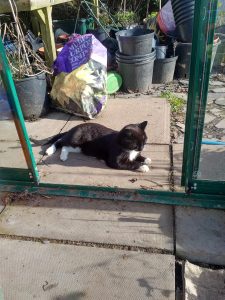