Has anyone tried this before? I’ve seen clips on Pinterest and Facebook about an easy and cheap way to propagate roses from supermarket bunches using a potato.

I think its to do with the starch in the potato that acts as a boost to the rose as it produces roots. Anyway, whilst I read more to learn the science, I thought I would give it a go. I have tried propagating from bought flowers before, but not to any great success. To be honest, I think if it was as easy as its made out to be, more of us would be doing it?

Anyway, I am prepared to do the experiment and feed back the results, but I would love to hear your views. Have you tried this, or something similar? 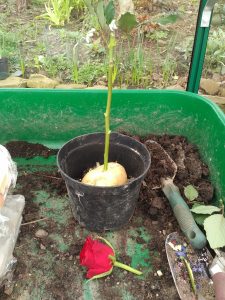 Drilled a hole in a potato to about halfway. Chose a rose stem that was quite thick. It had been in water and rose food for a couple of days from the supermarket.

I cut the flower off and left two leaves, put it into the potato and put the whole lot into compost with some slow release food and have placed it in the greenhouse.

I took off one of the leaves as it was drying out and I didn’t want the rose to focus on the leaves rather than putting down roots. Otherwise it looks OK.