At Easter we had a week in Disneyland Paris. I’m going to leave that there as there is too much to say about taking two children to Disneyland and then around Paris for a week.

One day stands out in our week away, however, the day Bethan slept in with a poorly cheek. For context, both kids have a rare condition which means that when they have an underlying bug or infection, their salivary gland just under their ear can swell and become very painful. Harri has looked like he has a golf ball in his cheek before now.

Typically, being on holiday, it was Bethan’s turn. We think she was just run down, over tired, it had been a long Easter break already! She was dosed up on paracetamol which is all we can do, but she hadn’t slept well the night before (therefore neither had I) and so she and I had slept in. At midday we got going, as we had lunch booked with the Disney Princesses at 2pm. I know, we were all beyond excited!

Bethan woke, but was not up to much and despite packing 3 princess dresses she did not want to wear one that day. Having squashed these dresses into our carry on luggage, we were desperate to persuade her, but she would not budge. So Harri stepped up, a bit to encourage Bethan but mainly to hurry us all up and to get out of the hotel room. He said he would wear a dress too. Luckily one did fit and while he pranced around the room Bethan got herself ready.

Hooray! We were back in holiday spirits. I suggested taking a photo and at that point Harri remembered that he had been dared by some of his rugby mates to wear a dress this week anyway. So he went to town with Bethans make up set. ‘Clown’ isn’t a great look, but he pulled it off. 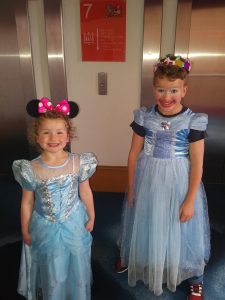 At this stage we were just relieved that Bethan had brightened up and had her dress on. Harri had t-shirt and jeans on underneath and I expected to get the dress thrown at me at any moment.

We got the shuttle bus to the Disney Park, and once we got there he started to get lots of looks, and I mean lots of pointing, laughter and whispers. My maternal hackles were raised, what was the matter with these people? Hadn’t they seen a boy in a dress before? (Do I need to credit David Walliams with that?!)

But rather than getting upset or embarrassed he seemed to love the attention. He even curtsied for one woman to take a photo!

So my fear for his emotions turned to pride (again) as not only was he brave enough to don a sparkly blue princess dress for his little sister, he also wasn’t intimidated by the opinions of others. As I said to my mum that evening, he is a proper rugger bugger. He is obviously secure enough in his own masculinity to be able to prance around in a dress unencumbered, and even enjoy the attention. Now I can see I am going to be worried about what he gets up to on his future rugby tours………. 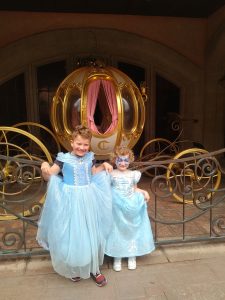 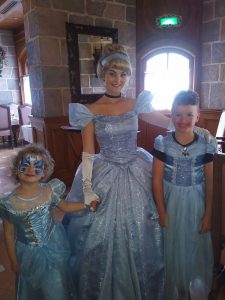